A chat with Mr Sellotape 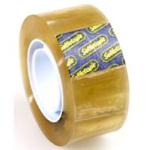 pe here, head of the mighty Sellotape stationery empire. Interesting fact: did you know that last year 16 billion rolls of Sellotape were sold? That’s quite impressive, yes? But hold on, this got me thinking… how much of that Sellotape sold was used to package up other boxes of Sellotape ready to be sent out to shops and newsagents all over the globe? So then I got thinking some more and started wondering what was used to seal up boxes before Sellotape was invented… I could come up with only one answer: spaghetti.

It’s true, it has to be! Think about it – spaghetti is Italian and several thousand years ago the Romans ruled the earth. Them Romans was Italian so it makes perfect sense from a historical perspective. They must have had a huge cauldron that they cooked all the spag’ up in and then used it to tie up their sandals. Chances are that they used it to string their bows in an emergency as well. In fact, they probably even whipped their slaves and crucified Jesus Christ with the stuff. Say what you want about the Roms but they knew how to use their spag’ and it kind of makes you wonder where it all went wrong for them… and I reckon they got into the bad habit of overcooking it. Nothing worse than going round someone’s house for dinner and finding that they have overcooked the pasta, it totally ruins the night. Heaven only knows what effect it would have on an empire quite literally built on the stuff.

Although I talk about the Romans ruling the earth, this was long after the dinosaurs went extinct. Now I tell you them bally dinos where a strict lot what with all the sharp teeth and deadly claws flying about the place. I wonder how the tyrannosaurus rex would have used Sello or spag if either of them had existed back then – those arms of his are quite short and not really suited to finding the end of the tape. Plus, that big chin of his would get in the way and maybe even knock the roll out of his hand by accident. I reckon he could probably scoop up a load of spag quite easily and twirl it into a manageable clump – he could even make a giant spider’s web with it to catch any low-flying pterodactyls. Would probably have to get a helping hand from a passing diplodocus though.