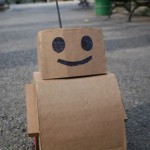 Scandal has yet again struck Buckingham Palace with the news that Britain’s most famous OAP has been replaced with a “Ghastly robotic clone that is nonetheless jolly convincing.” Suspicions about Her Maj. were first raised a few weeks ago when she “Suddenly started winning the arm-wrestling competitions,” and developed a “new-found affection for cannonballs and motor oil.”

Prince Philip said he first noticed that something was up “When I first overheard her flirting with the cutlery.” Maintenance engineers were initially surprised when she started asking questions about the Palace showers. “She seemed really fascinated about whether we were in a soft water or a hard water area and what effect that might have on metal exo-skeletons. I thought that Wolverine from the X-Men might be coming to stay but it all makes sense now.”

Robert Willow of The Royals Are Aliens Society has said that “This is further proof that we’re under attack,” and it is yet another example of the monarchy being behind the times after it was discovered that “Some of the flowers at the Golden Jubilee were made of plastic.”

Security has been ramped up at the Palace and the paranoia means that “The occasional false alarm is raised.” One nervous maid passed out with shock when “I saw a tall, skinny zombie with a droopy face making strange noises in one of the bedrooms.” Everyone was evacuated and Scotland Yard performed a full sweep of the area.

“Turns out it was just Prince Charles stepping out of the shower.”

The bra that Freddie Mercury, lead singer of rock band Queen, wore in the video of the song ‘I want to break free’ has sold for a staggering £1.5 million at a charity auction in Oxfordshire. The bra is “Just an ordinary garment, none of that Wonderbra nonsense,” and “isn’t as yellowed or stained as much as you would expect such an old item of underwear to be.” The bidding was slow and cautious at first, but once the momentum started building, “There was no stopping it.” In true Queen fashion the atmosphere was “Merry and gay,” though “Brian May was a miserable bastard as usual,” and once the bidding finished he “Stormed out in a huff.”

Curator John Mouse told us, “Brian was really pissed off because an earlier auction for his hair net only sold for about £8k. The cheap git was bidding in 50p increments for a while but once the price got past £10k he just sat there in a huff and sulked until the bra was sold. Then he ran out and nearly knocked over a table of Smarties and hairspray that he asked to be setup for him.”

Since the breakup of Queen in 1991, May has struggled to establish himself as a solo artist and his debut single ‘Hair Today, Gone Tomorrow’ was a complete flop. His solo album, ‘Life without an Alice band’ was hotly anticipated but critics slated it on release and it barely made an impact anywhere. It was a moderate hit in Germany where it got to the number two spot, outsold only by a David Hasslehoff greatest hits re-release.

May then made a move into film and was the stunt double for Rapunzel in the film Rapunzel: The Revenge. May broke his collar bone when he fell out of the tower during the famous ‘Rapunzel, Rapunzel, let down your hair’ scene and Dolph Lundgren was brought in as a replacement.