Small, yappy dog finally decides to shut the fuck up 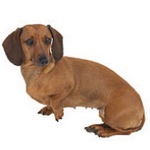 A dachshund dog called Max has, after four years of excessive barking, finally decided to pack it in. The decisive moment came when he was standing next to the lion enclosure during an impromptu visit to the local zoo. “There I was, looking at the big cats whilst my owners ate some ice cream, when I noticed a lion approaching me from behind the glass. He didn’t look like much so I just stared at him and bared my molars for a bit. Then he opened his mouth and roared. I was so shocked that I almost shit my pitty-pants.”

Max went on to say “Now, normally I’m a barky type of guy. And hey, why not? If I saw a bin I’d bark at it, just because. Same with a lamppost, it’s just the way it is. My mother always told me that if something looks out of place, you should bark at it. If everything looks fine, bark anyway just in case as it’s better to be safe than sorry. Mark it and bark it as they say.”

Max’s brush with death has prompted him to “Re-evaluate my priorities a bit.” He says “right after that lion got in my face, it got me thinking – is that how I look when I go on one of my barking escapades? Is that how people perceive me to be? Just a loud mouth? Do I want my kids growing up being scared of me? Uh-huh.”

“It kinda reminded me of that Monsters Inc. film. You know, where that big gay blue bear thing finally sees how much he scares children. I’ve seen that film maybe a dozen times but it’s only now that I see the wisdom behind that scene. Big blue guy, I respect you.”

“Talking of having kids, I wonder if the vet will let me have my testicles back.”

26 responses to “Small, yappy dog finally decides to shut the fuck up”